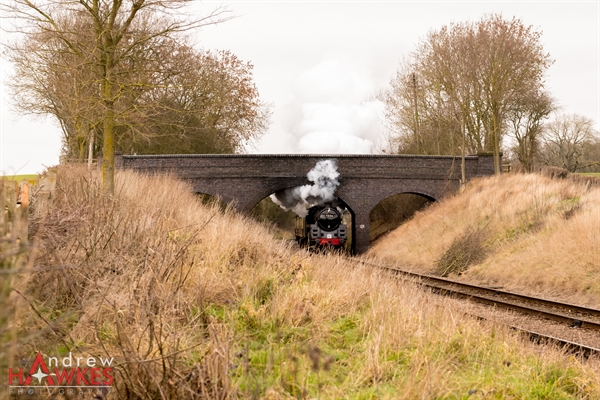 Ref:
gcr 18
Date:
Location:
Photographer:
Andrew Hawkes
Steam Trains
The Mid-Suffolk Light Railway, affectionately known as the ‘Middy’ is a heritage railway, which in its heyday was a branch line which ran for just 19 miles from Haughley to Laxfield.
A section of the railway at Brockford near Stowmarket has been recreated with original station buildings which capture the atmosphere of this quirky line.
Today’s ‘Middy’ is not only a museum but runs regular steam trains and has a programme of carriage and wagon restoration complementing its efforts to recreate this slice of Edwardian England.
It was featured in the BBC's "Great British Railway Journeys"

I captured The Flying Scotsman on a visit to Didcot Railway Centre. The Scotsman was painted in the livery of British Railways green with the number 60103.
Also shown here are other steam trains including Edward II (6023) and the (60009) Union Of South Africa.

I spent a full day with the The Great Central Railway who went up and down the line until we got our photos, very photographer friendly. The GCR is a heritage railway in Leicestershire, named after the company that originally built this stretch of railway. It runs for 8.25 miles between the large market town of Loughborough and a new terminus just north of Leicester. It has period signalling, locomotives and rolling stock.
The engine used on this day was a British Railways Standard Class 5 No. 73156 which was a preserved British steam locomotive. Its restoration at Loughborough on the Great Central Railway was completed in 2017, and it made its formal debut on 5 October 2017 in the guise of 73084 Tintagel. 73156 is the sole surviving BR Standard locomotive built at Doncaster Works. It had been allocated to two GCR sheds (Leicester and Woodford Halse)

To the people with a keen eye yes, I know there are three photos that aren't trains but a steam road roller. Oh well, it's my website!!!
Back
Previous
Next